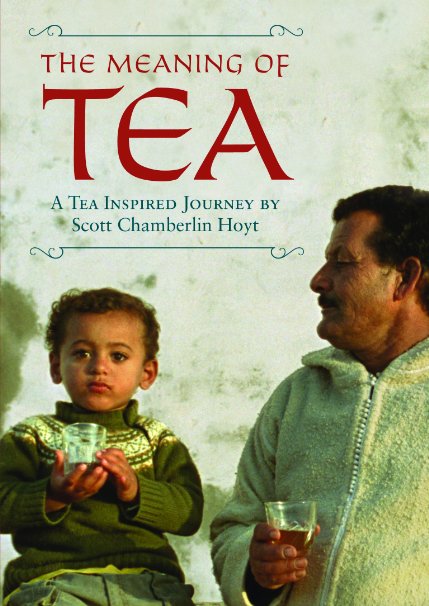 The Meaning of Tea is eye candy for tea drinkers.  It opens in San Francisco, with tea expert James Norwood Pratt posing the question the: “How is my spirit so affected by this leaf?”  Gorgeously shot and edited, the film allows viewers to soak in various tea cultures from around the world in search of the answer.

It was also the perfect film to watch after reading Darjeeling.  The film moves from San Francisco to  Darjeeling, visiting some of the plantations that are mentioned in the book, while giving a glimpse at the region’s breathtaking landscape.  The world of Darjeeling tea is displayed in all its aspects, from tea pickers in the field, to the zip lines that speed the tea down the steep slopes to the factories for processing, all the way to the Siligiri Tea Auction House.  Planters talk about being born there and tea being essential to survival, “even more than water.”

From Darjeeling, the film moves to Morocco, which has a relatively young tea culture.  Although tea only took hold in Morocco in the 19th Century, it quickly became essential to Moroccan culture, an “absolute family necessity.”  Made with mint, sugar, and Chinese gunpowder tea, this regional speciality is so engrained in Moroccan culture that “if you go to someone’s home and they don’t offer you tea, you are not welcome there.”  The pots used to serve the tea are just as important, made through an elaborate process of bending and stamping metal.

The relatively young tea culture of Morocco is contrasted to the much older tea traditions of Japan.  Although people still love tea ceremony and Japanese green tea, coffee is becoming more popular in Japan, so tea manufacturers are developing new innovations to keep pace with changing consumer tastes.  An example is a bottle designed with a twisting cap that releases powdered matcha into mineral water, creating a sparkling green tea.

Tea has a much different position in French culture, where coffee is considered “sexier.”  (That seriously made me LOL, btw.  I don’t know if I have ever considered the inherent sexiness of a beverage before.)  Still, tea has its proponents in France, who appreciate tea’s “calming” nature.

Just across the English Channel, tea has a much different position in British culture:  “Tea is like a second nature.  English people don’t think about why we drink tea, we just do.”

Finally, the filmmakers visit China, the origin of tea.  The poetic musings of from the film’s opening are echoed: “In the process of making tea, you come to see the meaning of life.”  What a wonderful way to wrap up a visually stunning film that I highly recommend watching.

Also, the special features on the The Meaning of Tea DVD are well worth a view, especially “Tea People,” which gives explanations of different styles of tea.

TeaMuse: The Meaning of Tea – A Film Review

The Meaning of Tea Film