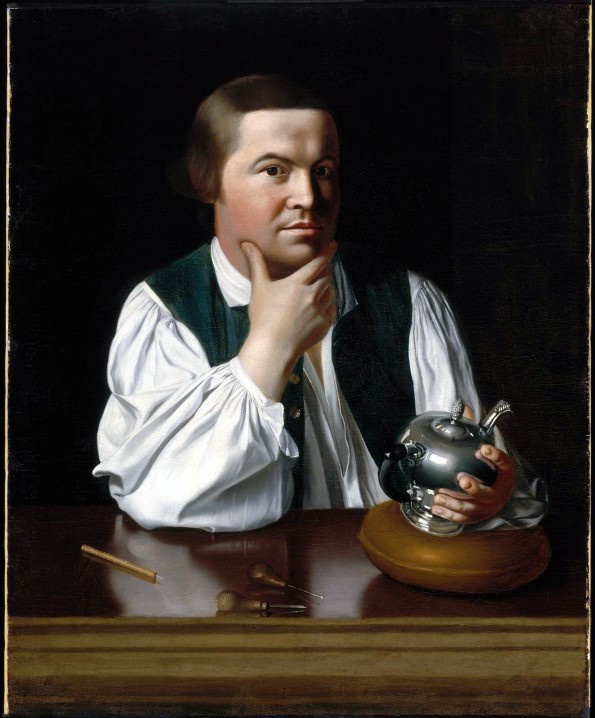 Like many fine teas, Paul Revere by John Singleton Copley appears uncomplicated at first encounter.  But it is more than a simple portrait of an American patriot.  It is a historical document, a political statement, and a technical achievement, evidence of Copley’s position as one of the first great American painters.  Although Copley is known for portraits in general and this portrait in particular, he was not exactly comfortable with the concepts of mixing art and politics.  Nor was he particularly fond of portraiture.

…Copley himself was decidedly ambivalent about painting faces and, indeed, about the American uprising. Painting and politics mixed badly, he said. And portraits—which trafficked in mere likeness, not the upper reaches of the imagination—were a lowly genre. Copley yearned to try his hand at histories, biblical scenes and classical allegories: the highest reaches of Art. There were few such commissions to be had in the colonies, and fewer instances to see. A meager diet of black-and-white engravings and painted copies fed the provincial painter’s eye. Since the mid-1760s, he had longed to travel to Europe, where he might study “those fair examples of art that have stood so long the admiration of all the world.” But he was a cautious man in a rash age, not least because he had so much to lose. For nearly a decade he painted and pined, an armchair traveler.

His caution was warranted, as was his ambivalence.  Copley’s father-in-law was a primary agent for the East India Company, whose tea was dumped into Boston Harbor in protest of unfair taxation on December 16, 1773.  Since many of the subjects of Copley’s portraits were colonists who were very much opposed to increasing taxation from England, one can imagine that this placed Copley in a precarious situation on the home front.  Perhaps that is why he left for Europe only 9 days after the Boston Tea Party, never to return.  Or perhaps he just REALLY loved tea and knew he wouldn’t be getting any in the Colonies for a while.  Regardless, the choice to show Paul Revere holding a teapot, given Copley’s own relationship with the world of tea, is at least an interesting coincidence.

The teapot that Revere is holding in the portrait demands closer attention, as well.

The date inscribed on the painting—1768—enhances the iconographic significance of the teapot, both as an aesthetic and a political symbol. Teapots were among the most complex objects Revere made; they represented his craft in its highest form. According to Revere’s account book, he made a total of nine teapots from 1762 to 1773. Of those nine, six were made between 1762 and 1765, one in 1768, and the other two in 1773. Revere’s production of teapots had declined by 1768 in response to the Townshend Acts, which imposed duties on a variety of imported goods including tea. The teapot, then, was a provocative attribute for Revere, especially given his radical Whig politics.

It was an equally provocative attribute for Copley to include in the portrait, given his usual distaste for politics in art and his personal relationships.

I spent some time trying to find photos of the teapot from the portrait, and I saw a few that looked similar, but none that were definitely THE teapot.  I did find out, however, that one of Paul Revere’s later teapots recently sold at auction for $230,000.  Yowza.  You’d need some very special tea for that teapot…maybe some Da Hong Pao?

One final note: after looking at the portrait of Paul Revere for so long, I am convinced there needs to be a biopic about him starring Jack Black: 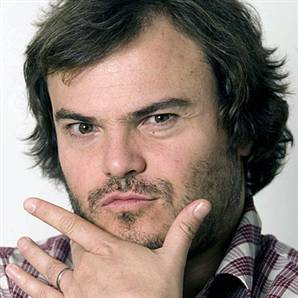