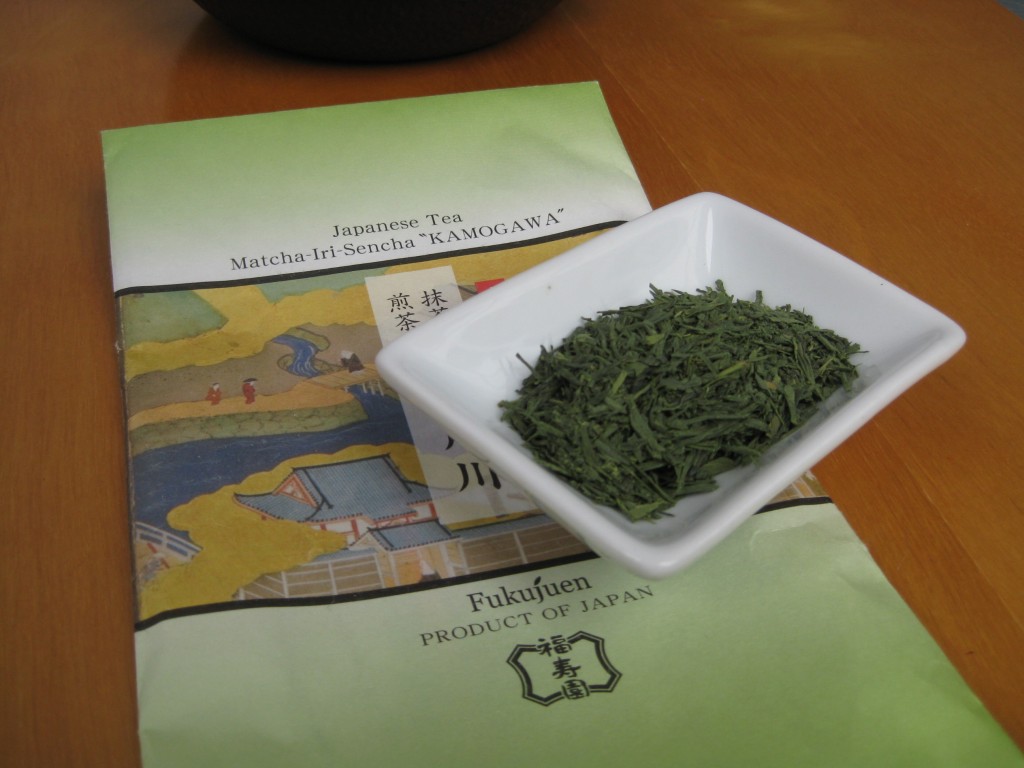 I figured I had better write a post before I drink all of this wonderful Fukujuen green tea.  It tastes like Japan in a cup, all fresh and effervescent…which is especially remarkable considering that my friend Richard had picked up this tea for me in November 2013, and had forgotten to give it to me until just recently.  That statement probably needs some explanation.  You see, when Richard was going to Japan a few years ago, he asked if there was anything he could pick up for me as souvenirs, and I had two requests: 1) tea, and 2) incense from Kiyomizu-dera.  I had gotten some incense there years before that I had fallen in love with, and I hadn’t been able to find anything quite like it since.  I knew he had planned to go to the temple anyway, but I thought if those plans fell through (and let’s face it, that is a bit of a specific request for a souvenir), he would still be able to find me tea pretty much anywhere.  To my surprise, when he returned, he said he was successful on both counts.  Woohoo!  However, Christmas was just around the corner, and we were both traveling, so we decided to just keep each other’s gifts until we got back to LA to exchange.

If I recall correctly, we came back about a week apart, and then we were both playing catch up on projects and work, and then by the next time we got together, we had both pretty much forgotten about Christmas.  There was a moment, a few months after that, when our friend Mel was telling me about the split toe socks (tabi) that Richard had gotten her from Japan.  I mentioned to her that he told me he got me stuff, but then he never gave them to me, and I didn’t want to ask because I figured he had his reasons (maybe he was saving it for my birthday, who knows.)

As it turns out, he did have a reason.  He had forgotten about, and then lost, both the tea and the incense, and only remembered that he even got them when he rediscovered them recently while going through piles of paperwork.  The incense is still MIA, but now that he actually remembers buying it, I have hopes it will be recovered soon. 😉

Getting back to this fantastic tea from Kyoto.  The “Best Used By” date was marked as July 2014, but I had just recently read about how properly packaged tea can still be quite delicious even after years of storage, so I decided to give it a try.  I was happy with that choice from the moment I opened the foil package.  The grassy fragrance wafted out and filled the air.  I thought maybe I was imagining how strong the aroma was, so I brought out a bag of Yamamotoyama Sencha that I had recently purchased for comparison.  Even more than a year past its “Best By” date, and almost 2 years after it had been purchased, the Fukujuen tea was so much more aromatic than the Yamamotoyama.

Although I don’t have any “fresh” Fukujuen tea for comparison, I have no complaints about the flavor of this tea.  The foil packaging is apparently really effective, because the tea has now been opened a few weeks, and the flavor seems to be holding up.  And what a delightful flavor it is!  The combination of matcha and sencha creates a lot of body and flavor complexity.  Plus, it has a really nice aftertaste that lingers on the tastebuds.

Fukujuen Matcha Iri Sencha can be purchased on their website, although it doesn’t have the pretty “Kamogawa” packaging like my Kyoto souvenir.  😉