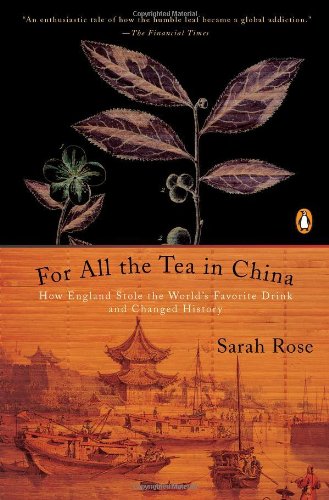 For All the Tea in China: How England Stole the World’s Favorite Drink and Changed History

Why oh why has there not yet been a movie made about this book, or its hero, Robert Fortune?  The entire time I was reading it, I was envisioning it as classic Indiana Jones or The Mummy.  It is such an amazing tale of intrigue and adventure that is too good to not play on the big screen.  I have read several books on the history of tea (which I will discuss in later posts), but this book wove a fantastic, compelling narrative about the dangerous lengths the East India Company was willing to go to commit international industrial espionage, and how much Robert Fortune would risk to complete his assignment.  Some reviewers found the story a little too fantastic, and I am not going to argue with that assessment simply because this review from The Guardian mentions JG Gordon, and I would definitely like to read more about his contributions.  Potentially exaggerated historical data aside (and I do admit to rolling my eyes more than once), For All the Tea in China is a great summer read that totally needs to be an action movie.

From battling pirates with only one gun to sneaking around forbidden territory in disguise to stealing a prized crop and trade secrets, all of which could result in unspeakable torture and death, one thing can be said of Robert Fortune: the man had some huge brass balls.  It seemed as if every step of his journey had some challenge that would have stopped other explorers in their tracks.  Fortune kept pushing on though, determined to retrieve samples of the finest tea plants in the world.  His successes abound centuries later, as sales of black tea produced in India quickly surpassed that of China, due in no small part to Fortune’s contributions. I don’t want to give too much away, but I never knew horticulture could be so exciting…and I say this as someone who likes plants so much that I rode the “Living with the Land” ride in Epcot Center 4 times on my last visit to Disney World just to see the 9 lb. lemon. That lazy boat ride in a Florida amusement park seems almost laughable when compared to Robert Fortune’s forbidden boat ride up the Yangtse River into the heart of China.

Ok, so now that all my gushing is out of the way, I have to confess: I could not get into this book the first time I encountered it.  I had borrowed the audiobook, thinking I would listen to it as I did housework, in my perpetual (and somewhat futile) attempt to live more efficiently.  The experience taught me some lessons.  I would play the book and sit down with a big pile of laundry, but 45 minutes later I’d only have a couple of shirts folded and my attention was fully taken by the book.  Also, I was starting to get drowsy.  So, I learned that audiobooks are not for me.  I also learned that nothing can make laundry more interesting.

In the end, I borrowed the hardcover edition of the book from the library, and brewed myself several pots of delicious Ti Quan Yin and Tung Ting oolong to enjoy as I read. Pure Bliss.